The late Harry S. Truman said “Men make history and not the other way around. In periods where there is no leadership, society stands still. Progress occurs when courageous, skillful leaders seize the opportunity to change things for the better.”

Gregory Foster, commonly called “Pastor Greg” by his congregation, is the epitome of being a leader to “seize the opportunity to change things for the better” at First Church. Since the death of his father and pastor in 2003, Pastor Greg has diligently worked to fulfill and continue his parent’s ministry and mission of ‘Walking in the Word.’ Raised in an environment where church was his second home, fulfilling his father’s ministry was imminent. Remembering his great grand mother’s words to his father, ”If God called you, the Lord will qualify you,” it seemed as though she also was speaking directly to him. 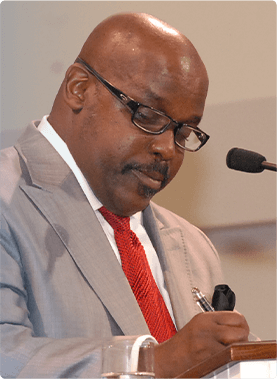 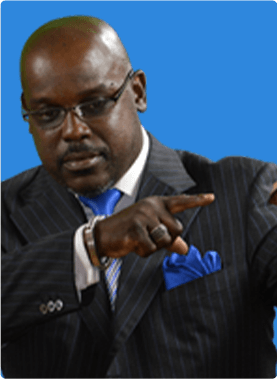 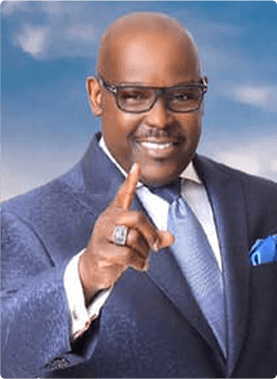 When Pastor Greg was called to the ministry as a young man in October 1979, his father insisted that he go to school. In the early 1980s, Pastor Greg enrolled in the Southern Bible Institute. He received a diploma in Biblical Studies, May 1984. His father praised him for his accomplishment, but he insisted that Greg continue his education. He did. Over several years, Pastor Greg went on an education whirlwind immersing himself in educational research and study.

While working on his Masters at Tyndale Theological Seminary, he was simultaneously studying in an External Studies program with Chicago’s Moody Bible Institute. In the same year, May 1993, he was bestowed a Diploma in Old Testament from the Institute and his Master of Arts in Theology from Tyndale. He continued his educational quest in Tyndale’s doctoral program.

While working on his doctorate, he accepted the calling to become Senior Pastor of the First Independent Baptist Church, Corsicana, Texas, 1994. Two years later, June 1995, he received his Doctorate of Ministry degree. A couple of years passed and Greg returned to Dallas to assist his father with First Church’s ministry.

Dr. J. Lee Foster had developed a Christian and religious partnership between Criswell College and First Church. Criswell offered Greg an opportunity to participate in a graduate program of Christian Education. In May 2001, just two years before the demise of his father, he completed his second Masters from Criswell College. Following the death of the founding Pastor, Dr. J. Lee Foster, Pastor Greg became the Senior Pastor of First Baptist Church of Hamilton Park, the first and only Senior Pastor since the church’s beginning. In 2009, Pastor Greg received a second Bachelor of Arts degree from the Southern Bible Institute.

“Let us not lose heart in doing good, for in due time we shall reap if we do not grow weary.”

Pastor Greg has received numerous awards and commendations for his many involvements in Christian and community activities. With a generous heart and commitment to serving, he works on several community Advisory Boards supporting many causes to “reach the lost, care for the needy and uplift and encourage the forgotten.”

He is a member of the National Counsel of Christian Counselors, Southern Baptist Convention and the Greater Dallas Council of Churches. Currently, he is President of the J. Lee Foster School of Biblical Studies.

A man of faith, the Dallas, Texas native reiterates to his parishioners, “Let us not lose heart in doing good, for in due time we shall reap if we do not grow weary.” Galatians 6:9.

Get to Know Us

Copyright | All Rights Reserved | Site By The Church Online, LLC.